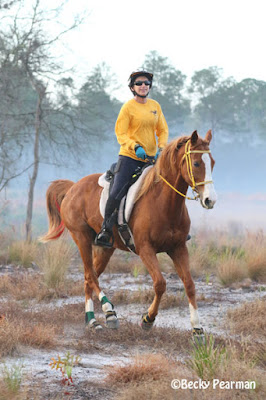 Marie’s Gold was one of those thousands of Thoroughbred racehorses who fall through the cracks after their racing careers are over. She’d raced three years, winning 1 race in 12 starts. She ended up as a rescue with Horse Protection Association in Florida as an 11-year-old in November 2017 because her owner had dementia and wasn’t taking care of her.

Jo Harder fostered the mare in early summer of 2018. “She was a body score 1 at the time HPAF rescued her,” Jo recalls, “and they weren’t sure if she was going to make it because she was so emaciated.” Jo adopted her in the fall of 2018. “Luna” had recovered so well from her ordeal that Jo took her on her first slow trail ride just weeks after settling in. She easily completed 10 miles in the summer heat of Florida. The mare went on to complete an intro ride and then 5 LDs/CTRs in late 2018/early 2019.

“She is super athletic and recovered fabulously,” Jo says. “After a 25 in February of 2019, I had her blood tested and asked one of the vets if she was ready for a 50.  He told me that there was still a lot of gas left in the tank and that there were no indications that she couldn’t do it. A month later, she completed her first 50 [in the Florida FITS ride] with energy to spare.”

Luna is Jo’s third OTTB, and the only breed she’s ridden in endurance. Thoroughbreds who have raced aren’t just get-on-and-go horses. “OTTBs are wonderful, but they take some extra effort, especially at the beginning as they adapt to the trail.

“Keeping in mind that OTTBs are generally just taught to run fast in a controlled environment, the rider has to learn to throttle the horse and adapt to endurance.

“The rider has to keep in mind a few things too… like if you lean forward to duck under branches and pull on the reins, you’ve just told the OTTB to go faster.”

In addition to being named 2020’s AERC High Mileage Thoroughbred, another highlight of their endurance venture together so far is the completion of Luna’s first 75-miler at FITS last March. “We completed the last loop alone and almost totally in the dark with all kinds of forest creatures making noises around us. She just kept going and going and going. We truly completed as a team.”

Luna and Jo are developing a very special bond. “Luna has had a hard life, but she trusts me,” Jo says. “She raced over a dozen times, and it was apparent that her life at the track wasn’t a picnic.

“In the beginning, she would sometimes become unnerved over simple things, probably because of some bad memories. Once she gained the confidence to ride off alone, she was superbly happy because she could really use those long legs at a pace that works for her.

“When she sees a hill, she puts that 16.1 body into a 6th gear.  I just hang on and enjoy the ride because I know she'll get me up that hill safely." 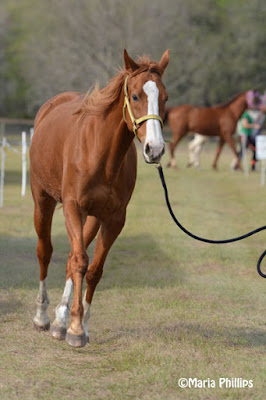