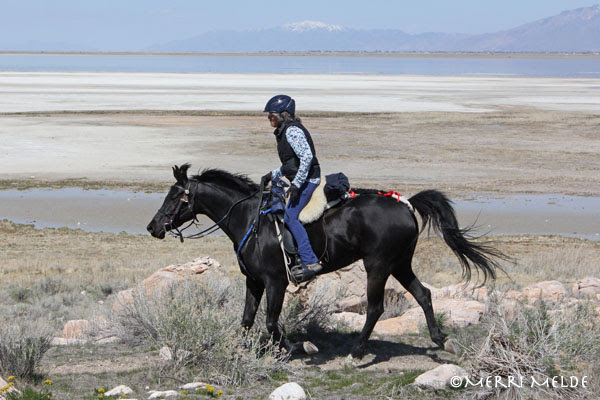 In a way, you could say that Satin chose Elaine. “I went to Kim Johnson’s Belesemo Arabian Ranch [in Caldwell, Idaho in 2017]. I wasn’t buying; i was just looking,” says Elaine.

“I like mares, and I went into this round pen with 3 fillies. All of them stood there, but she came up to me and stood with me. She wouldn’t leave. So that’s why I bought her. I figured she was worth it. She’s the one of the last ones from Belesemo Obsidian, their stallion that died in 2018.”

Satin was a year and a half old at the time, and Elaine gave her time to grow and mature before she broke her. “I turned 70 last December. I broke her myself. I’ll tell you one thing - it was gentle!”

Last year was Satin’s first endurance season, which was due to various reasons, including COVID-19 rearranging the entire endurance season. Antelope Island in Utah, normally in April, was moved to September, and Elaine took Satin there.

“I wasn’t going to do anything other than trail ride. Then she was so amped up and such a pill, and she needed some kind of exercise, and the vet said ‘Go for it.’ I said, ’OK, I’ll just do the first day, I don’t think she can do two.

“And she came through the finish vet check of Day 1 with flying colors, so we did the second day. She rode the whole 2 days by herself.

“She’s never been anything but calm. I mean, she acts like an Arab sometimes, but it’s like she figured out her job. And when she was going up that hill on the second day, she just went into this long beautiful trot. And I was just singing, having fun, because she was so animated and so forward.

“I love this horse! She is laid back, which I think is the way Belesemo Ranch brings them up. They’re just as Arab, and can be just as flighty; she can curl that tail up over her back just like any Arab. She can be as dynamite as any Arab, but she’s very sensible. I think it’s their upbringing, because Kim has a lot of kids that help out and do all that stuff, and I think that’s admirable. The horses are kid proof, they’re friendly, they like people.

“To me she is just awesome. I would not change a thing about her.” 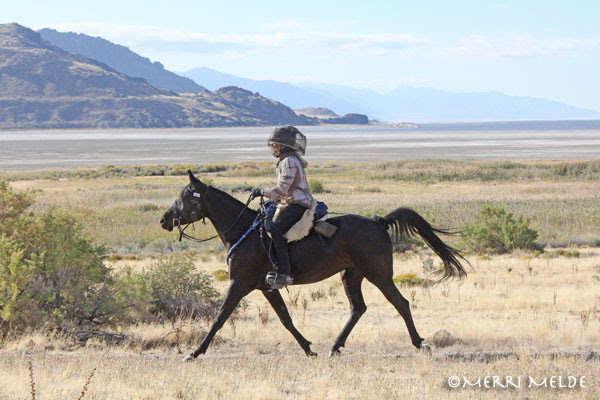 Posted by Endurance.Net at 7:26 AM