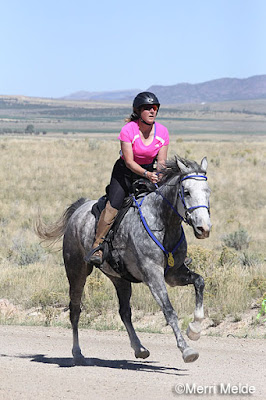 Some 11 years ago Gwen Hall was looking for a horse to buy for endurance, though she hadn’t sat on a horse in 20 years. “I was that typical middle-aged female-getting-back-into-horses kind of thing,” Gwen says. “I was a former ultra-marathoner, and I’ve been through 2 knee arthroscopies, and various other things, so I knew my time with that was probably done. And I’d heard about Tevis, because of the Western States Run, and thought that looked really cool.”

Joanne Pavlis helped Gwen get back into riding, and then took her to Arapahoe racetrack in Colorado to look at Arabians. Gwen walked into the stall of the gray 4-year-old Sizedoesntmatter, and that was pretty much that. “He was just so calm and we just clicked. So I brought him home, and we haven’t looked back.”

Gwen credits his trainer at the track, Jerry Partin, with Dakar’s easy transition from the track to the trails. “Jerry was just a fantastic horseman, and just did such great work mentally with him. The horse had a brain.”

Gwen spent much of that winter getting to know her new horse and working on their partnership. “We would go out on hacks with a halter and a lead rope.

“But then I discovered at his first endurance ride that I really had bought a racehorse. I thought I was going to die! If it hadn’t been for two now very good friends who parked one horse in front of me and one horse behind me, I think I would be dead.

“But once we kind of got that initial partnership, then I worked with a trainer, Taffy Plaisted, who is a phenomenal dressage trainer. She did a great job training horses. She doesn’t focus on the rider, but she teaches you how to teach your horse. And it made such a huge difference in his way of going, and all those pieces just came together for us.”

From Dakar’s first endurance ride at age 5 through his 11th season at age 15, Gwen and Dakar have reached the top rung of the sport. Their record includes 3 Top Ten Tevis finishes, 2 AERC 100-mile National Championship titles, and making the USA Team for the World Equestrian Games Endurance Championship in the fiasco that was Tryon, North Carolina.

When asked what makes Dakar so special, it’s hard for Gwen to put into words.
“It’s hard to verbalize, honestly,” she says. “We just click. We’re a good team. Any challenge I have put in front of this horse in the time I have owned him, he not only meets but he exceeds my expectations. It doesn’t matter what I’ve done with him. He tries. He wants to do well.

“He’s lucky in that he’s naturally gifted as an athlete. And he really has a very calm demeanor. He’s a thinker. But he has that spark within, I guess the heart. I’ve had the pleasure of riding a lot of horses over the last 10 years, but he’s just got that special something, that at least with me, it works.

“I thank Dick Reed, who sold him to me off the track, for working with me on his purchase.

“And if little things like that hadn’t happened, I never would have bought Dakar.

“I really don’t have the words to express what works, what I’d look for in another horse like him, because I don’t think I’m ever going to find that. To use a cliche, he is my unicorn. And I thank god every day that he’s part of my life.
Posted by Endurance.Net at 7:31 AM