Jennifer Leach, of Horseshoe Bend, Idaho, had wanted a mule for a long time, ever since seeing a fancy pair of tall mules in a cherry festival parade many years ago. She loved their stoic, regal bearing.

Due to many years of back surgeries from a fire department injury, she decided to get a mule in the hopes that it would be easier on her back. The 15-hand sorrel AppleJack entered her life on, coincidentally, and perhaps auspiciously, National Mule Day, October 26th, 2019, from Dreary, Idaho. When she test-rode him, she was amazed at how much smoother he was on her back than her friend's horses were. She was sold.

“AJ” was Jennifer’s first mule, and only the second one she’d ever ridden. She’d only owned one other equine, a Morgan, and that was over 20 years ago.

She bought AJ for trail riding, but she’d always had Endurance in the back of her mind. “When it became apparent that he was a lot faster than my friends' Quarter horses,” Jennifer says, “I started thinking more seriously about Endurance but I was starting from scratch.”

She started reading about Endurance, and the following spring, 2020, she was ready to start conditioning but she needed a mentor. Enter Skyla Stewart. “I found a great one, purely by happenstance on Treasure Valley Riding Buddies Facebook page. We met and test-rode together at Eagle foothills and then Sklya proceeded to take me under her wing.”

Jennifer and AJ entered their first 25-mile Endurance ride in October in the Owyhee Halloween ride in southern Idaho, where AJ raised a few eyebrows, and not just for his good looks.

“That morning was pretty crazy. He was so riled up, kicking, pawing and bucking, I could barely saddle him and needed help mounting him after falling while trying the first time!” Despite AJ’s antics at the start, they went on to finish well in 12th place.

“Both of us were pretty rusty and in need of some training - and bonding - so we took riding lessons over the winter with Skyla and her horse Jasper. I've learned a lot, but especially if I want AJ to become more at ease, that I need to be the kind of person I would want to be around, whenever I'm with AJ.”

The hard work is paying off; the partners have so far in 2021 completed all 7 of their rides: 4 LDs and 2 50’s. Their last feat was completing all 3 consecutive LD days at Old Selam Pioneer in south central Idaho, put on by the local Endurance riding club, SWITnDR (Southwest Idaho Trail and Distance Riders), with AJ winning the “Getaway Horse” prize.

“I love AppleJack's trot,” Jennifer says. “He has an all-day trot that is really easy on my back. He really seems to love Endurance but I also love that he will tell me when he's tired. The mule's sense of self-preservation is strong.

“His ears flop around when he's moving and happy (Happy Ears) and he often honks like a bullfrog while going downhill, which gets laughs from other riders if not some confusion from the other horses.”

Jennifer was surprised and thrilled with AJ’s Old Selam award. “Bless his big muley heart. I couldn't be prouder of the old guy.

“I love this new (to me and AJ) sport, the people in it and the friends I'm making!” 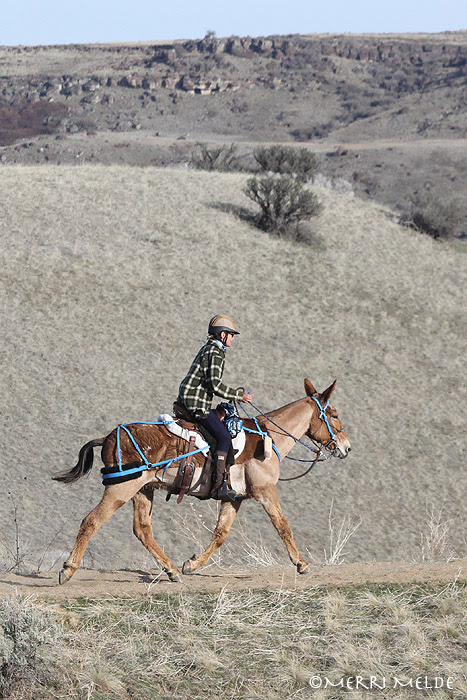 Posted by Endurance.Net at 7:11 AM