Treasured Moments is one of 5 USA team Endurance horses headed to San Rossore, Italy, for the May 22 Longines FEI Endurance World Championship 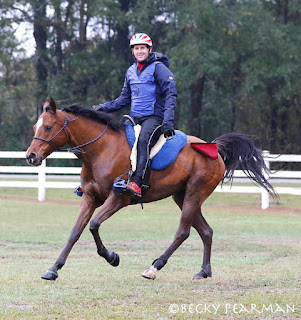 Treasured Moments could have been a top racehorse but for the year she was born. “She was really fast on the track but was in the stable that had the top three mares that year and she was number 3,” says Heather Reynolds.

Jeremy had shod her on the track as a late 2-year-old and fell in love with her. Since the mare was #3, the Reynolds were able to buy her as a 3-year-old. Racing’s loss, Endurance’s gain.
The mare has finished 23 of her 26 AERC starts over 7 seasons, and completed 9 100-mile rides. That includes 3 Tevis Cup completions with 3 different passengers. Her first 100-mile ride was the 2017 Tevis Cup with Jeremy; she not only finished third but came away with the Haggin Cup.

“What’s special about Treasure,” Heather says, “is her laid back, willing but competitive nature. She is ridden in a simple rope halter. She did the 2017 Tevis in a rope halter with a single rein so that Jeremy could hop on and off easily to run. She is all business. She’s not neurotic, but she’s not patient.” This versatile mare has carried 11 different riders in competition.

Besides the pinnacle of her third place and Haggin Cup in Tevis, another highlight is that she has the fastest 3 qualifying times securing her slot on the USA team. Jeremy will be aboard for the 160-km race in San Rossore May 22; this is his third time on the USA team and the 9th time competing abroad.
“We are really excited to go to Italy,” Heather says. “Treasure is training really well, she’s super sound and has the right mind to handle the pressure, and she’s already competed abroad.”

Posted by Endurance.Net at 3:48 PM