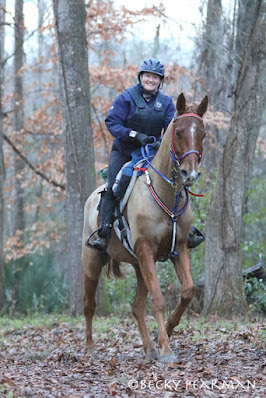 Both owned by Holly Corcoran

Holly tells the story of how she got Poete and Poetrie.

“Both Poete and Poetrie were bred by the Sayvetz family at Asgard Arabians in West Virginia. They are purebred Arabians and are both out of the Statistic daughter Poetikka.

“I took on Poete at 4 years old as a training prospect in cooperation with Asgard but as I started work with him, I just fell in love with him as a horse, not to mention his amazing, awesome athletic ability. So instead of working with Asgard to sell him, I acquired him.

“I always knew he had great potential and he is just so fun (and sometimes difficult) to ride and he has proven me right.

“Knowing how much I loved Poete and admired his abilities, when his ¾ sister was available, I purchased Poetrie as a 4-year-old.  Initially she was really tough and quite reactive, but given time and training, she has turned out to be an awesome horse.   “Poete and Poetrie are both athletic and capable. They can both be quite strong willed, and I find it best not to argue with them but to re-direct.

“Poete loves loves loves to canter and to pass horses.  So at the beginning of the ride this is where it takes negotiation or finding our “bubble”.

“Poetrie is very matter-of-fact, hard working and takes herself quite seriously (sometimes I have to laugh) but she takes AMAZING care of herself. Nothing gets in the way of her eating and drinking to the extent she will tell me if she wants to pull over and drink out of a puddle or stream or grab a bite of grass.  “I think the “coolest” ride for Poete, Poetrie and I was the January 2020 Broxton ride where I went into it planning to ride the 100 on Poete day one and Poetrie in the 75 day two.

“First I had been working on my own fitness to get to where  I felt confident I could do it, then it took making sure I had  great crew for the horses, and I took very good care of myself (ie, electrolytes, hydration, eating, etc).

“Poete and I won the 100 during a race off in the rain.  When we turned the bend in the trail and I asked him to GO I could barely see due to the rain. I was praying he didn’t spook at something as he blasted into the light.  He won and earned BC!

“So I was able to get to bed at a decent time to get up  early to ride Poetrie in the 75. We started the ride with her half sister, Lorienn and Canadian young rider, Charlotte Tremblay, but Lorienn forged and bruised her heel at mile 60.

“Poetrie and I continued on alone and won with over a 4 hour lead over the 2nd place horses!

“Poetrie is incredibly smooth to ride and takes little out of me so I had to ride in the order I did since Poete can be very tough!  “I am so grateful to be representing the USA in Italy at the World Endurance Championships. This has been my goal since 2008 and I am so excited to have earned the criteria for selection. This year it was based upon points and finishing, so both horses had two first place finishes in 100-mile rides over the last selection period starting June 2019.

“It is very challenging with all of the COVID and EHV-1 criteria for us and the horses, plus we are making our own arrangements, so it has definitely been an education! I just can’t wait to get there and get on the horse, then everything will flow from there!"

**Late Breaking News: Due to bad luck and bad timing, Poetrie developed a slight lameness, which will prevent her and Hanna from going to Italy.

Posted by Endurance.Net at 5:38 PM